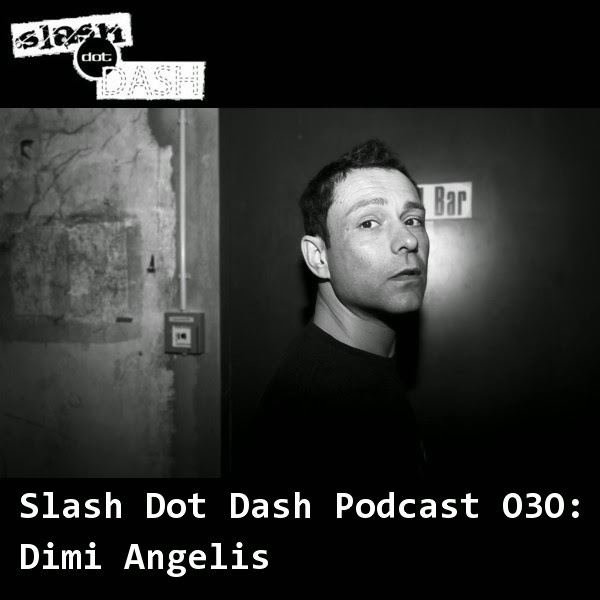 When considering his status as a beloved and respected member of the contemporary Amsterdam techno scene, it's sometimes easy to forget Dimi Angelis was among the founding members of the very culture that helped shape it. Promoting illegal raves and warehouse parties and puting his first needle on a record back when 'underground' was still a definable term. Dimi now holds well over a decade of international DJ-ing experience. I shouldn't come as a surprise then that this is directly reflected by his record collection, musical knowledge and technical ability which all easily match, and in most cases, surpass that of many.

Such an extensive frame of reference enables Dimi to look at 'techno' through a unique and highly personal lens. Well aware of the genres fluid boundaries, ever changing trends and the impact of continually developing technology, Dimi is able to elegantly step outside of the pre-determined fabric and in a sense mould it's essential elements into something that feels familiar but upon more careful observation, or rather listening, is actually quite special.

Putting personality and outspoken taste first, his DJ sets are always remarkable and at no point predictable, more so because he does not believe in easy pleasing/ Strongly opinionated and unafraid to speak on his thoughts, the records and flow incorporated in a Dimi Angelis set are equally straightforward and honest. What you see is in Dimi's case really what you get, but it always comes wrapped in something appropriately unexpected.

In 2003 he joined forces with good friend Jeroen Search and together they have since launched multiple successful projects including outstanding live acts 'Counterpart' and 'Dimi Angelis and Jeroen Search' as well as their own newly founded vinyl only imprint, 'A&S'. Under the first mentioned guise of Counterpart they are responsible for lauded EP's such as 'Ion' 01 and 02 on the sub-label of Rachmad's Scorp of the same name, 'Oxygenating; and 'The Next Level' on Audiosculpture and 'The Martian Mystique' on Jeff Mills' Mission (6277/Axis). More recently they have put out characteristic quality techno on their own A&S label, Balans, Stockholm Ltd, Smallville, Figure SPC and Traut as simply Dimi Angelis and Jeroen Search. 2014 sees the launch of ANGLS, Dimi's first imprint, to release his own material. With the first EP dropping in the next few weeks, this will act as the platform where he can represent the throbbing, hypnotic sound of Dimi Angelis.

Dimi's list of played clubs and festivals is nothing short of respectably long and includes Awakenings, Kozzmozz, Tresor, Rex, Berghain, Doornroosje, Paradiso, Dekmantel, Welcome To The Future, Free Your Mind, Rockit, Mysteryland, Club One, Stubnitz and even the late Innercity. Clearly deeming this list to be far from long enough however, Dimi's set on doing in the future what he's always done and still does best, play great techno, make you move your feet until they're sore and give you a little something to smilingly contemplate.

Naturally we say this about all our podcasts, but this addition from Dimi really is something a little but special. When searching through some old boxes he discovered a bunch of old CDs, on of which contained a recording, from 9 years ago, of Dimi Performing on he infamous East German transport vessel come nightclub, the MS Stubnitz. This power house of a mix just goes to show how long Dimi has been at the forefront of the techno sound that he helped develop in his home country. And even though it was captured in 2005 it still sounds just as forward thinking and fresh now as it undoubtedly did then.


For more info on Dimi Angelis please head over to his Facebook Fan Page. For the rest of the mixes in our series check out our Podcast Page on the Slash Dot Dash Website
Posted by Slash Dot Dash at 04:36 No comments: