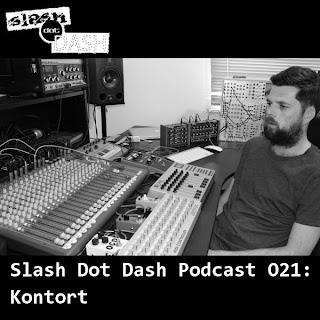 Kontort is the production alias of London based Andrew Wright. His passion for underground music is evident in everything he does. As a DJ, under the name of XI, he's spent the last 8 years building a name for himself across the UK's capital, which has seem him perform at the very best venues for a number of London's best promotions.

The last few years have seen him dedicate his time to a small number of projects. Firstly launching his own promotion, Slash Dot Dash. After a number of events, taking in some of the worlds best techno acts, the brand was expanded to include a successful podcast series and an informative blog.

The final step for him was to make his move into production, and the Kontort project was born. Using a combination of vintage analog hardware and modern day software, his roots are based firmly in old school techno virtues, but integrating it with modern software allows him to keep his sights set firmly forward.

In 2011 he finally got recognised for his work when he was signed to Italian label, Toffler Music, and had 3 tracks released as part of the Various Artists compilation CD, entitled 'From The Grave' and then two more coming as part of 'The Brave' the following year. In the studio he continues to conduct sonic experiments and more music will be surfacing soon.

For our 21st edition of the Slash Dot Dash Podcast Kontort ventures into the dark underbelly of techno, bringing together the minimalistic ideals of Detroit and the hypnotic warblings of Berlin to supply you with an hour long expedition of twisted beats and rhythms.

More information on Kontort can be found on his Facebook Fan Page or you can check out his studio jam videos on his YouTube Channel
Posted by Slash Dot Dash at 02:21 No comments:

For our first Mix Of The Day of July we head to Berlin and to one of our very favourite DJ / Producers, as Marcel Dettmann compiles and mixes XLR8R's 302nd Podcast. As you would expect it features the usual amalgamation of Detroit and Berlin techno in all it's styles as he effortlessly traverses his way through stripped down to deep and back straight up dancefloor annihilators, before rounding out with the stuttery experiment work out of Other Lives' 'Tamer Animals' by Atoms For Peace. As a prelude to 'Tamer Animals' you'll the find a track off the new EP by Anthony Parasole which is forthcoming on Dettmann's own MDR imprint.

You can download the mix from the following link

If you want to catch Marcel Dettmann in the flesh, at the weekend he'll be in Ibiza (RA) tomorrow and France (RA) on Saturday. The weekend after he'll be found at T in The Park, b2b with Ben Klock, on Sunday as well as performing at his home club, Berghain, on the same day (don't ask us in which order, we really don't know). More info on Marcel can be found via his Facebook Fan Page
Posted by Slash Dot Dash at 10:57 No comments: