When London Warehouse Events say they're putting on a techno event, it usually means it's going to be one of the biggest parties the capital has to offer, and unsurprisingly, they've gone and it again. After bringing you a number of Drumcode parties and a couple of CLR events, they look to another techno super brand, Speedy J's Electric Deluxe.


The event is the second stage of three event mini euro tour, all taking place this weekend. Tonight they begin in Lausanne, Switzerland, as Speedy J is joined by Phil Kieran and Thierry Collado, and on Sunday they finish in Amsterdam with Ben Klock, Marcel Dettmann, Hans Bouffmyhre and Giorgio Gigli.


But the one we're focusing on now is Saturday's London event. Heading down south to the newly refurbished Electric Brixton will be an army of techno fans expecting the witness some of the best techno around. Speedy J will be joined by Marcel Dettmann, Sandwell District and Marcel Fengler, whilst Room 2 is hosted by our friends at EarToGround, with Tom Dicicco leading the charge.


There's a couple of options available to you when it comes to your entry free. There's still some discount tickets left from EarToGround priced at £18 (+ bf) which you can grab from Resident Advisor. Or you can e-mail your names to jadedsundays@hotmail.com to get on their £10 concessions list. However entry is not guaranteed with guestlist, only with the tickets. It's your call but I expect there's going to be a big old queue!


More info on the Electric Deluxe mini tour can be found on their website where you can find out about everything else EDX related. There's details of their releases, podcast series, upcoming events and plenty more.
Posted by Slash Dot Dash at 02:19 No comments:

It's felt like almost forever since London party throwers, VOID, smashed up Public Life, with a bit of help from Perc and Truss, last September. Come next Sunday though, it will of been well worth the wait.

For the headliners VOID look towards Berlin two bring in two techno heavyweights. One born and bred in the city, the other a relocated London boy coming home for the weekend.

There's not much to say about Ben Klock and Tommy Four Seven that hasn't been said already. Both part of huge techno brands (probably two of the most recognisable to any techno fan) Klock with Ostgut and T47 with CLR. They'll be bringing their world renowned techno sounds to East London, and more importantly to the amazing backroom space at Cafe 1001 for this monster party. To show you just how monster this is, Ben Klock will be performing his longest ever set in the capital to close out the festivities!

The rest of the line up features a plethora of local London talent. Room 1 support comes from Kontrol Room (check out their latest promo video), Jay Clarke and Randolph. Our boss, XI, heads up the front room and will be kicking of proceedings with a very special dub techno set.

Get yourselves over to the Resident Advisor Event Page where you can buy your tickets and check out all the event info, including details of the of the pre party. More info on Void can be found on their Facebook Fan Page. The same applies for Ben Klock and Tommy Four Seven
Posted by Slash Dot Dash at 05:25 No comments:

Yesterday's drive home was a very interesting one, and that was mainly due to the fabulous debut mix, for the CLR Podcast, by Patrick Gräser. At first the name might not be a familiar one, but if I was to mention that he's the man behind Answer Code Request, then techno bells will undoubtedly start to ring.


After releasing his debut 'Subway Into' EP on his own self titled label, the mysterious faceless name then appeared on Music Man Records remixing Marcel Dettmann's 'Landscape'. Dettmann also featured ACR's 'Escape Myself' on his 'Conducted' mix album, for the same label, and the track was later released as part of the vinyl packs.


Now the man behind the project has been unveiled, there's no let up in his work. This year will see an ACR remix from Skudge's label (due next month) as well as a release on Dettmann's  MDR Records with plenty more in the pipeline we're sure.


The mix features a number of new original and unreleased material so as of yet, there's no tracklisting (I'll keep an eye out and update if I find one). You can download the mix from the following links


To find out more information on Patrick Gräser, you can 'Like' his Facebook Fan Page, follow him on Twitter or check out his music on Soundcloud.
Posted by Slash Dot Dash at 01:09 No comments: 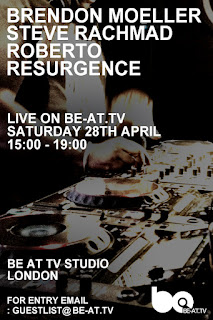 After a couple of weeks off in sunny South Africa, we're back home in London, so we should really do a new blog post. With plenty of stuff coming up we start off again with something a little bit different.


We begin with something a little bit different. Since it's launch a few years back, they have broadcasted live club events over the internet from venues all over the world. On Saturday they move no further than their own office to bring you an excellent techno showcase.


Ahead of their performances in Room 2 at fabric on Saturday night, Brendon Moeller & Steve Rachmad will be spending their Saturday afternoon in Soho at the B@TV offices to play live over the virtual airwaves. Joining them will be UK rising star, Roberto, and London based Resurgence.


The set times for the day is as follows


If you want to be in the studio watching it all unfold, you can send your names to guestlist@be-at.tv. Or  if you can be there in person you can watch from the comfort of your on home by going to their website.


As we said this is the unofficial fabric pre party, but if you want to be in the famous Farringdon basement metropolis for the night you can head over to Resident Advisor for full info and tickets.
Posted by Slash Dot Dash at 06:07 No comments:

Yesterday we brought you news of Sunday's Tt+ pres Forward Strategy Group & Rebekah on the outdoor terrace at On The Rocks, today we fill you in on the rest of the London Easter Weekend's parties. It's a chocker one. We're extremely excited that Scuba is bringing his Berlin party, Sub:stance and Shackleton, to London. That would be enough on it's own, but the fact that they're supporting an Ostgut Ton party, which features Ben Klock, Ryan Elliott and Tama Sumo, is definitely the icing on the best Easter Cake ever!
Elsewhere we have Stroboscopic Artefacts boss, Lucy, alongside Tobias in Room 2 for WetYourSelf! at fabric and Bas Mooy, Mike Parker and Roberto for Coma at The Camp. Full line ups and tickets links below...

We've got plenty of events to tell you about over the Easter Weekend and here is the first of them. Techno Therapy launch Tt+ and welcome the return of Forward Strategy Group. They last appeared for Techno Therapy at the launch of Perc's 'Wicker & Steel' album.
Joining FSG will be Birmingham's first lady of techno Rebekah as well as our boss, XI, alongside some unannounced London DJs. The venue has been announced though. It's 'On The Rocks' which is opposite Basing House.

Expect some awesome daytime techno on the outdoor terrace, before continuing the carnage inside, as the venue opens it's doors for the first time since it's full refurbishment. Tickets are available on Resident Advisor
Posted by Slash Dot Dash at 07:08 No comments: