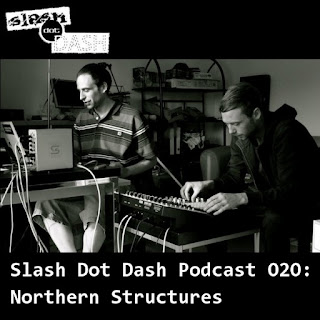 For our 20th podcast we feature our first live set from two rising stars of techno. Northern Structures, Troels Baunbæk-Knudsen and Lasse Buhl, is a Copenhagen techno based duo focusing on organic and industrial inspired electronic music. Their debut on the label of Adam X, Sonic Groove, hit the techno scene hard in early 2011. The “Self Similarity EP” was played- and charted by DJ’s such as Regis, Ben Klock, Marcel Dettmann, Tommy Four Seven, Chris Liebing, Rolando, Xhin and Milton Bradley etc.
Shortly after the first 12” was released, Northern Structures performed their first liveset; powerful and hands-on techno, heavily influenced by the guys’ individual backgrounds in everything from house over dubtechno to drum’n'bass. Very diverse and yet focused, constantly changing and with no standard tracklist every set is unique. Their second release, the “Service and Devotion EP” on Sonic Groove, also received a lot of positive exposure, making 2011 a very successful year and Northern Structures continue their no-compromise approach to music in 2013.
The mix displays everything that's making them feature across many dancefloors worldwide. Powerful kicks, eerie submersed drones, metallic industrial hits and oscillating crescendos expertly combined to produce an hour of unrelenting techno weaponry.
You can subscribe to our podcast series in iTunes or you can download or stream the mix from the Soundcloud player below

For more info on Northern Structures, head over to their Facebook Fan Page. If you happen to be in Berlin at the end of the month you can catch Northern Structures alongside a whole load of techno talent at Magdelena. More info on Resident Advisor.
Posted by Slash Dot Dash at 05:03 No comments: