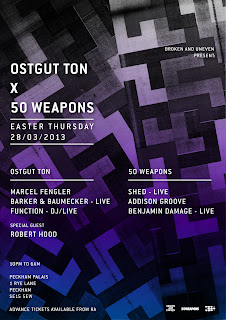 Ostgut Ton once again join up with Broken And Uneven, as they return to London for the first time since that epic sweaty night in Wapping last August and this time they're bringing 50 Weapons with them. It's a start studded affair wherever you look. The Ostgut Ton room features Marcel Fengler (who was one of the real unsung heros of the last party), Barker & Baumecker (Live), new Ostgut signing Function and special guest, Detroit Techno pioneer, Robert Hood.

The 50 Weapons room makes the whole night a difficult prospect. There's going to be some tough choices to make. Live sets from Shed and Benjamin Damage with be perfectly complimented by a DJ set from Addison Groove. If you've not caught a live set from Shed before, we highly recommend taking time away from the Ostgut room to experience one of our favourite musicians doing his thing.

Tickets are available from Resident Advisor.

On top of this when 6am rolls around and you don't want to go home yet (as is quite often the case) everyone will be upping sticks and relocating to the infamous East German fishing boat, the MS Stubnitz, for the after party. Marcel Fengler will continue where he left off from the previous party as he is joined by Dark Sky and Dolan Bergin.

After party tickets are also available from Resident Advisor
Posted by Slash Dot Dash at 03:46 No comments: 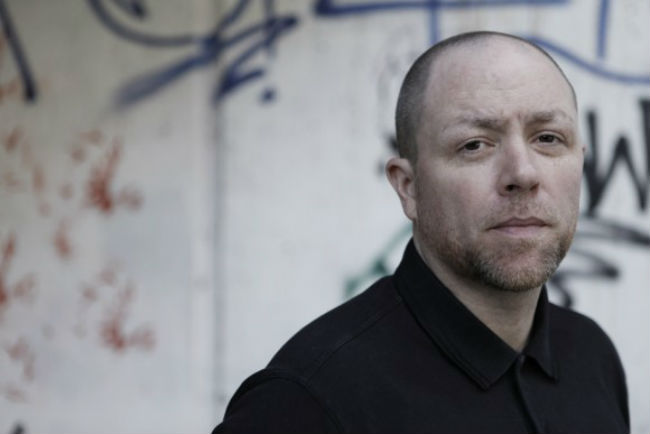 On Saturday UK Techno poineer, Ben Sims, returns to fabric's room 2 for another assault on the eardrums. And the man who's spent most of the last 12 months in the studio has put together a special mix for the fabric blog to display the fruits of his efforts. It doesn't get much newer than this either. Every track on the mix is either scheduled for release soon (on his own Hardgroove and Theory labels as well as Drumcode) or they're unsigned. So unless you've caught Ben play lately (or someone he might of given them too) the mix will consist of 40 mins of music you've never heard before.

There's also an interview to go along with the mix. That can be found on the fabric blog. You can download of stream the mix from the soundcloud player below. As we said earlier, Ben Sims will be headlining fabric's Room 2 on Saturday alongside Norman Nodge and Skudge. Tickets are available through the fabric website. If you don't happen to be in London this weekend then head over to his Resident Advisor DJ Page where you'll find details of upcoming gigs in France, Holland, Spain, Ireland and America. For all the other info you can like his Facebook Fan Page or follow him on Twitter.
Posted by Slash Dot Dash at 05:39 No comments: 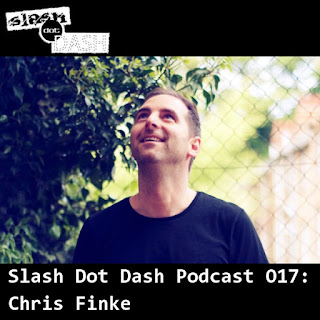 You would be hard pushed to find another artist quite like Chris Finke. Whether it's smashing dancefloors worldwide with his unique mix of upfront techno, bass, forgotten gems and anything else he feels like; holding down a 9 year residency at the UK's biggest and best techno institution “Atomic Jam”; his diverse bass-shaking production and remix work, or his cutting edge broadcasting career, the boy has “been there - done that” and is just getting going. Since his debut release on Luke Slater's “Mote Evolver” imprint in summer 2012, plus the launch of his own high profile weekly radio show coming soon, business is booming!
Raised on a steady diet of rave and techno, his early days saw him compete in the UK DMC championships, and he soon combined his turntablism and love for techno when he started the “Flux” parties and record label. From there, he hooked up with Ben Sims to form “Split”, a series of game changing parties for the London techno scene, selling out Turnmills, SE1, The Key, plus European tour dates as they went. In addition, their 4 year long “Split Radio Show” was a true institution - syndicated worldwide on both FM and internet stations and enjoying a huge loyal following of listeners tuning in each month.
DJing isn't just a job for Chris; it's everything and he does it differently to anyone else. Combining long layered mixes over 4 decks, with faster choppy drops and fills (referencing his turntablism background), his electrifying, technical sets have taken him all around the world, from New York to Japan; Moscow to Singapore and just everywhere in between. He is the sole resident DJ at Atomic Jam and has held international residencies at Decadence in Ghent, Belgium and La Coruna in Spain. His appearances continue to prove incredibly popular and he is just as at home playing at fabric in London or Glastonbury Festival as he is at intimate clubs like Doornroosje in Holland or Unit in Tokyo. His true musical versatility as a DJ has been a great asset in being able to move even the most clued up crowds, from upfront techno, through cutting edge bass and future music, right down to dipping into his massive record collection and pulling out astonishing tracks you've never heard before.
His big-room productions such as 'Sleep When You're Dead', ‘Petrolbomb’, ‘Shut that Door’ and ‘Dance of Death’, along with killer remixes such as Mark Broom’s ‘Got Me Working’ and a Guy Called Gerald’s classic ‘Blow your House Down’ have helped secure him as a regular fixture in the charts and radio playlists of a huge number of DJs the world over. He employs the same DJ sensibilities when approaching his work, never satisfied with repeating himself and pushing the dancefloor in all directions. 2012 has seen Chris become more prolific as his dedication in the studio has really started to pay off.
As if that's not enough, Chris also finds the time to teach DJing and music production both privately and around the world for the Ministry of Sound, appearing on UK national TV's “The Gadget Show” and others along the way.

Ahead of his performance at our next party @ The Shelter, on Saturday 16th March (Full info on the Facebook Event Page), we invited Chris to put together our 17th podcast to give you a taste of what to expect from the live performance. He delivered an intense hour of ever building energy to get your fully prepared for the audio onslaught to come.

You can stream and download the mix from the soundcloud player below, or subscribe to the podcast in iTunes

For more information on Chris Finke you can check out his Facebook Fan Page or you can follow him on Twitter. To find the rest of the Slash Dot Dash Podcasts you can head over to our Website
Posted by Slash Dot Dash at 03:00 No comments: fabric have been pulling out all the techno stops for the month of March. Last weekend saw Cosmin TRG and A Made Up Sound join Terry Francis in Room 2. This week his accomplices are none other than Berghain resident Marcel Dettmann teams up with Blueprint Records' production duo of Regis and James Ruskin, that go by the name of O/V/R.

With Levon Vincent and Delano Smith taking their place alongside Craig Richards in the main room, this is a night to get the technoheads salivating all the way to the former meat locker.

Tickets are available from the fabric website
Posted by Slash Dot Dash at 08:41 No comments: